All Blogs | Written by: Emma, the Hagetisse in All wise woman's posts, Food foraging, Health and wellbeing, Magic, Plants 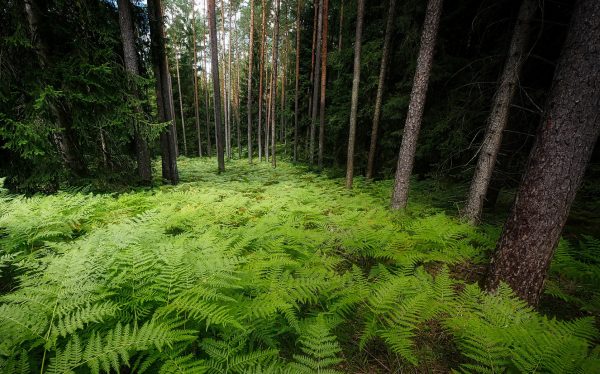 I really enjoy the seas of ferns which you’ll find in forests in temperate climates like ours. Ireland was even more covered in them; forest over there would contain a jungle of ferns. More than 50 different types of fern can be found in the Netherlands. Ferns are very exceptional and not only because they are medicinal, magical and edible.

Ferns are the dinosaurs among plants. They’re so ancient that we’ve even found fossils from hundreds of millions of years ago. They have a special way of reproducing, namely by means of spores. If you look underneath the leaves you can see them.

The most common species of fern in the Netherlands are bracken or eagle fern (Pteris aquilina) and male fern (Dryopteris filix-mas). Bracken is partly edible. The rhizome is first dried and after you can eat them boiled or roasted. Usually, after roasting, it’s ground into a powder that you can then process together with flour into, for example, pasta.

You can eat the young shoots, which are called fiddleheads, as well. Beforehand, remove the woolly parts and blanch the shoots. Then put them into cold water for 2 hours. Now you can cook them. In both cases it goes that you should eat it only in VERY small amounts, because otherwise side effects can occur. The same applies to a number of other fern species, for instance to the ostrich fern.

The male fern is medicinal and used to be widely employed against parasites, specifically worms. However, you really have to know what what you’re doing when using this plant, as poisonings have occurred in the past. This also applies to another well-known fern species, Venus hair, which has been used against a wider variety of ailments, such as respiratory and urinary tract infections.

Many magical properties are attributed to ferns. They are said to protect against malicious entities and enchantments. They bring luck when gambling and attract money and wealth. Need some rain badly? Burn some fern together heather to attract rain.

As far as I’m concerned, ferns are also beautiful to behold. Just put me into a forest with lushly growing ferns and I’ll feel completely at home. The sight of this ancient plant alone is enough for me to let go of the everyday worries and merge with nature around me. They’re just magical…