How clocks disturb our biorhythm; why we should get rid of daylight saving time

All Blogs | Written by: Emma, the Hagetisse in All wise woman's posts, Health and wellbeing, Up close and personal 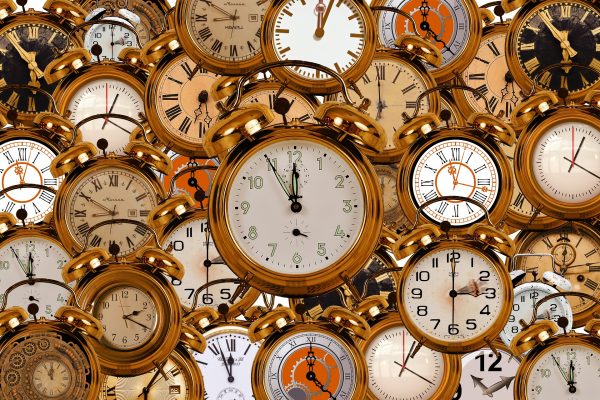 Last weekend it was that time again: daylight saving time started. For me it’s always a moment to be amazed by what people do to themselves. There are quite a few human inventions that I wish they’d never been made. The clock is, next to the combustion engine, quite high on that list. That thing has caused quite a bit of misery, if you ask me.

Living the way we were meant to

The clock, among other things, facilitated that. One of the consequences of our modern life, which quietly causes a lot of misery, is not being able to follow our own biorhythm. We are all forced into the same social rhythm of getting up early to go to work – or getting your kids to school – coming home late from that same job, cooking, eating, and then going out to exercise.

Everything has its own rhythm

While, originally, we actually woke up in our own sweet time, our exercise was getting our food and we went back to sleep at the end of the day when we were tired. A world of difference. I personally suffer if I have to follow our society’s rhythm. I’m not exactly an early riser and an alarm clock going off at 7 am literally hurts.

My children are the same, 7 am is way too early for both of them. My husband has less trouble with getting up, but does usually sleep a little longer when left to his own devices. And then there’s the difference between summer and winter. I spend a lot more time in bed in winter, while in the summer I sleep less.

What is your natural rhythm?

Stop whining, you might think. However, anyone who has read the scientific studies on the influence of a disturbed biorhythm on the development of all kinds of, sometimes very serious, diseases, would take this seriously. For example, it’s now generally accepted that night shifts can cause cancer. There are always people who will interject that there are also people who work night shifts and don’t get cancer. There sure are, but that remark is a fallacy. It’s only logical that those people exist.

After all, we are not all the same and we do not all have the same biorhythm. For example, there are people whose biorhythm suits night shifts perfectly and people with a less accommodating natural flow. For example, my brother gets up bright eyed and bushy tailed at 6 in the morning. My mother is a night owl, while my father gets up with the rooster. That’s perfectly fine, as long as we are allowed to follow those differences in rhythm.

These differences in biorhythm can be explained in evolutionary terms. After all, to keep a group safe, it was useful to have people around who were naturally more awake at night. They were bound to be more suitable people to keep watch. Logically, these people survived more often when danger arose at nighttime as well. After all, they were already alert. It’s, therefore, not surprising that this trait was reproduced.

In fact, the only reason clocks have become such a success is that they facilitate a uniform work rhythm. After all, you can’t run a business if you’re not sure your employees will turn up. The clock thus primarily serves an economic interest. In fact, it is so strange that people stop eating when they are hungry and drink when they are thirsty, but when the clock says it is time.

That is also an unhealthy development. All those bodily signals and processes are there for a reason. By not listening to your body any more, you disturb your natural system and you forget how to listen to it. Being able to live according to your own biorhythm, on your internal clock, is an important step towards a healthy lifestyle.

In the meantime, I’ve been free from the terror of the clock for a while now. I remember what it was like, from my school days and the time when I still worked for a boss. Every morning I hurled my sleepy body  into traffic and I ate when someone else said I could.

Thank goodness that’s changed. My children are home schooled and I work from home at my own pace. No early morning appointments for me. By now I know that I am not a night owl and not an early riser. I’m somewhere in between. I eat when I’m hungry and drink when I’m thirsty. I go to sleep when I’m tired and get up when I wake up all on my own. The difference in energy levels that ensued have become normal by now, but I remember how surprised I was back then. I suddenly felt so rested and fit.

So I don’t do daylight saving time. Of course, I have to deal with a changed time on my stove and my computer. But my body does not participate. The day still starts when I wake up. That will most likely be earlier and earlier, as the days get longer. I definitely do less in winter than in summer, but that doesn’t matter. My work moves with the seasons. After all, I am more than a human resource, a cog in the machine. The clock does not dictate my life.