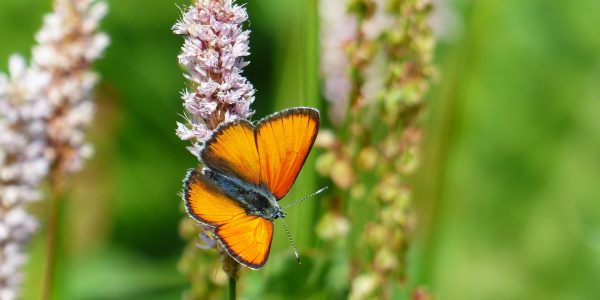 Since I was a child I have admired bistort, Polygonum bistorta. To me, she was a rather intriguing plant, which is why I am writing a monograph about this particular plant and not about tormentil, Potentilla erecta, a more well-known plant with largely the same effects. I think this is because of its nickname, snake weed. At a young age I learned that that name came from the shape of the root, but that didn’t diminish the infatuation. I’d like to mention that there may be some confusion about the Latin name of this plant. You will also come across the name Persicaria bistorta and Bistorta officinalis. I’ll use Polygonum bistorta, because for me it reflects the plant’s most important properties: the plant belongs to the knotweed family and it has a twisted root.

And it is the root which is so important to those who want to use the plant. Whether for its medicinal or magical effects, the root is the part we should look for. Bistort’s beautiful and exuberant blooms are, of course, a nice extra, which is why you’ll find it in many gardens nowadays. Medicinally, she is useful in diseases of the gastrointestinal tract. Its other main medicinal use is for skin and mucous membrane afflictions.

Magically, bistort is of interest to those who could use some luck or money, or would like children. It is also a herb that can be used for divination and to strengthen your psychic strength. You can also use it to drive unwanted entities out of a building and distinguish friend from foe.

Bistort gets its name from its root that is twisted twice. This can be clearly seen, for example, in one of the drawings in this monograph. Just above the root, the plant has a leaf rosette with elongated ovate leaves which are medium green to dark green in colour. A single stem emerges from the rosette bearing the spike-shaped inflorescence. The stem leaves are shorter than the rosette leaves. The latter have a truncated or cordate base. The flowers are placed close together on the spike and are light pink to dark pink in colour. They consist of five perianth segments, eight stamens, three fused carpels and three free styles. The seeds are dark, shiny nuts.

Bistort can be used for tanning leather because of the large tannin quantities it contains.