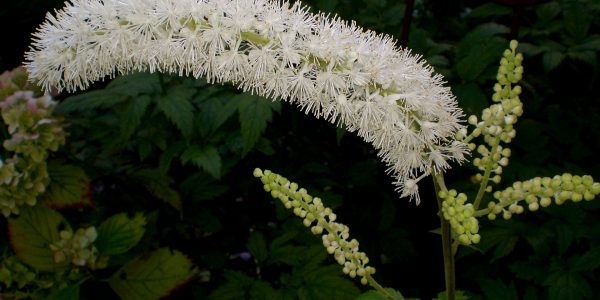 Black cohosh, Cimicifuga racemosa or Actaea racemosa, has a special place in this plant vademecum. In general, I prefer to use indigenous plants as much as possible or plants that have been established here for so long that most people don’t even know that they are not native originally. I like making an exception for this beauty, because I’ve been able to improve the lives of women with this plant, often in combination with chaste tree, uncountable times.

Black cohosh is a benefactor when it comes to numerous complaints related to menstruation and menopause. It’s also a useful plant for regulating contractions. There are several other indications against which she works well and which I will cover in this monograph. Think, for instance, of inflammation of the respiratory tract and rheumatic diseases.

Magically, black cohosh certainly has many uses. But because of the plant’s exotic nature, I don’t use it in my magical practice myself. However, in the monograph I will certainly identify and discuss customs that are known to me for those who would like to apply this plant magically.

Did I mention that black cohosh is also a pretty as a picture? Not surprising that it is a beloved ornamental plant in Europe nowadays…

Black cohosh is a large plant that can grow up to 3 meters high. She has a creeping, black, woody rhizome. which is where her nickname black snakeroot comes from. A sturdy square stem grows from the rhizome. The dark green leaves vary in size according to their position along the stem. The lower leaves can grow up to a meter long. The leaves are threefold and have a roughly serrated margin. The inflorescence is eye-catching and consists of long, elegant spikes with creamy white flowers. The flowers have no petals or sepals but consist of numerous stamens. The flowers smell very sweet, but not in a pleasant way. The flowers are followed by egg-shaped capsules containing flat brown seeds.

Black cohosh has an insect repellent effect, both fresh and dried. This characteristic is what inspired the Latin name Cimicifuga.
The nickname black snakeroot comes from the plant’s appearance. The root is black and sinuous and the plant was also used against snake bites in the past.
The variants heracleifola and foetida can also be used for the applications mentioned in this monograph.