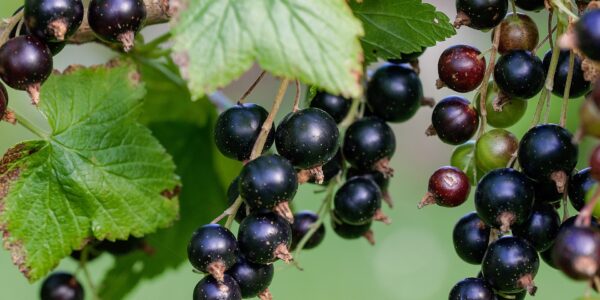 Sometimes you come across plants that perfectly combine usefulness with tastiness. As far as I’m concerned, blackcurrant, Ribus nigrum, is one of those. I really love berries of all shapes and sizes, even this one, whose taste not everyone can appreciate. Any berry is in essence healthy, but this specific berry plant has extra health promoting properties. Blackcurrant has a regulating effect on your adrenal gland and therefore has the ability to promote processes that require cortisol to complete them properly. And there are quite a few of those. In fact, any condition which involves an inflammatory stress response continuing for too long is a candidate for treatment with blackcurrant.

But this plant can do much more. Blackcurrant protects blood vessels in many ways and protects the urinary tract. It affects hormonal disorders and those of the skin. And it will even enable you to see better. And that’s just me cherry-picking some medicinal properties. Blackcurrant can really, really do a lot. Part of its characteristics are a consequence of the fact that this plant contains both omega 6 (GLA) and omega 3 (ALA) fatty acids in a favourable ratio.

In terms of magical properties, not much has been handed down from the past about the use of this plant. It’s known that the berries were used to muster courage, especially for those going on a solitary trek or on a quest. In addition, it symbolises abundance and is therefore useful in magical work related to this. And, of course, blackcurrant is edible, although, as said, not everyone likes this berry.

Blackcurrant is a large (up to a meter or 2) and wide branching woody shrub. The branches have no spines or thorns. The leaves are alternate and palmate with 3 to 6 lobes. In April and May, the shrub blooms with small, radially symmetric bell-shaped flowers with 5 sepals and petals, which grow in racemes of 4 to 10 flowers.
After flowering, these flowers form into the berries. The berries are green in colour at the beginning and go from red to finally black during the ripening process. They are ripe in July or August and are then up to 1.5 cm in size.

Although blackcurrants are grown on a fairly large scale, you almost never see them in vegetable departments or shops. The entire harvest usually goes to manufacturers who make them into anything ranging from medicines to liqueurs. Most people also can’t appreciate the taste the berry, which is often deemed too sour for consumption. The taste does change a bit after being frozen.
Although blackcurrant is not native to northwestern Europe, it has been cultivated and used here for a long time.
You can use black currant leaves as a kind of tea.