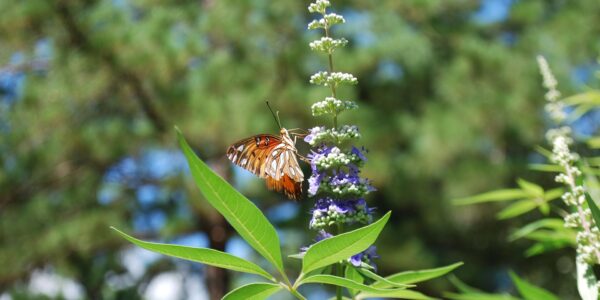 During my studies I have come across this plant, chaste tree, Vitex agnus castus, often enough. Because many diseases that we typically see in women have hormonal causes, this was – and is – quite an important plant. I didn’t find it hard to remember because of the name in Dutch, monk’s pepper. I understood the pepper part, given the appearance of the fruits. The ‘monk’ part was more difficult, until I found out that these ‘peppers’ were used in monasteries to make it easier for monks to live a celibate life. Hence, the name chaste tree. As often in plantlore, it says what it does and it does what it says.

Monk’s pepper is a plant that is medicinally mostly used for a specific purpose. This plant is great for all kinds of hormonal disorders. Think of menstruation issues, but also acne, infertility and breastfeeding challenges. But it can also be used in men. In addition, monk pepper is useful for simple discomforts in the digestive system.

The magical properties of chaste tree can be found in the same areas. For example, the plant can be used in rituals to represent the feminine divine. It is also useful in fertility magic and magic to inhibit and promote libido.

Monk pepper is a plant that likes warmer climates, but is also common in ornamental and medicinal gardens throughout the world. In terms of size, this plant can occur as a shrub, but also as a small tree that can reach a height of 5 metres. The latter especially happens in warmer climates. In colder climates, they often die down in the winter and then sprout again in the spring.
Wiry branches with a felt-like layer.
The leaves are palmate and opposite. They are about 15 cm long, lanceolate, green on top and grey felty at the bottom. The leaves exude an aromatic scent and the plant attracts insects and butterflies, the latter also because of the inflorescence, which consists of small, white, pink or lilac coloured flowers with 5 petals that grow in several whorls forming a long slender spike, which can become up to 30 cm long.
After flowering, fruits appear in the form of small berries that are reddish brown to almost black in colour. These berries smell a bit like peppermint and have a peppery taste. The berry contains 4 seeds.

The folkname monk’s pepper comes from the custom to mix the berries of this plant into the food of monks in order to temper their libido and make it easier for them to maintain celibacy. That’s not the only sex-related uses the plant had in ancient times. As far back as the ancient Greeks, monk pepper had a reputation for guarding virginity. Quite ironic that monk pepper can actually ensure that some forms of infertility are remedied.
Vitex refers to the fact that the branches and twigs of this plant were used in basketry.