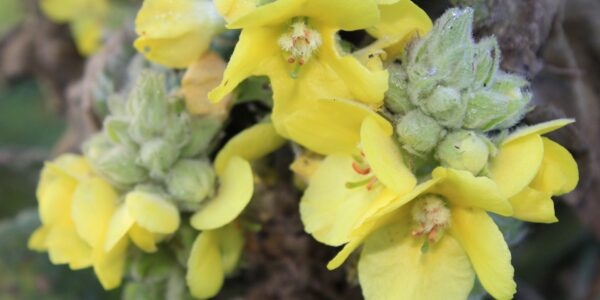 Great mullein, Verbascum thapsus, is kind of my plant. It has shown up in every yard I’ve had over time, whenever I needed it, actually. I’m sure I’ve mentioned this before, but my airways were a major worry for me during the first decades of my life. This plant still reminds me that I have to take good care of myself.

Mullein is not my favourite plant; I’ll write about that one later on. But this plant definitely belongs in my vademecum if you ask me. After all, it grows locally where I live, has brilliant medicinal properties and is also incredibly beautiful. Most people who know this herb will predominantly think of its application against all kinds of respiratory diseases. And, yes, it works against those like a charm. What fewer people know, is that mullein also helps against all kinds of pain and can be used externally against – again – pains, but also in skin conditions.

Magic properties of this majestic plant

Mullein has quite a few magical properties. It protects you from wild animals, malicious entities and colds. It gives you courage when you need it. Not only does it give you insight into where to find your loved one, it also attracts love. And, for those of you who use this magical ingredient, you can use crushed mullein leaves as a substitute for graveyard dust.

The mullein is a human-sized plant – it can grow up to 2 meters high – that you can hardly overlook. It stands on a strong taproot. In the first year, a base rosette with woolly leaves up to 45 cm in size is formed above the taproot. These are ovate to lanceolate with a shallow serrated margin and light grey-green in colour.
In the second year, the stem develops, which has the same colour as the leaves and has a pannose feel to it. The stem leaves are smaller, sessile and less hairy. The inflorescences consist of dense spikes of clustered yellow flowers that are up to about 2.5 cm in diameter at stem apex. The flowers spread a subtle honey-like scent.
After flowering comes the ovoid capsule with 5 chambers containing small seeds. Their main way of spreading is the plant being shaken by the wind in the autumn.

Related to the denseflowered mullein, Verbascum densiflorum, which has a similar effect. The two often cross-breed.
The name “torch” or “candlewick” comes from the use of applying grease or resin to the stem of mullein and using it as a torch.
The leaves were also used as a wick in an oil lamp.
You can use infusion of mullein to lighten your hair.
Mullein can be used as a healthier alternative to tobacco.