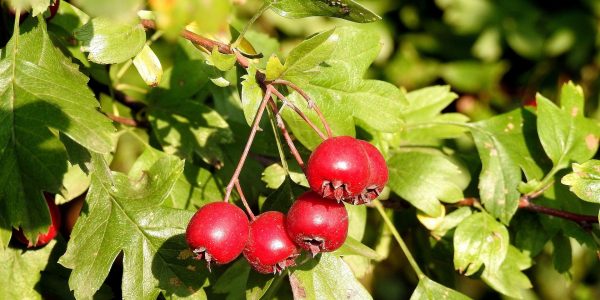 Today I am writing the plant monograph of my favourite tree, the hawthorn, Crataegus monogyna and laevigata. I know this is actually a shrub, but the hawthorns I remember the clearest were so old that they had grown into trees. With their twisting branches and coarse bark, they usually looked like ancient sages. I loved spending time underneath them.

You have probably noticed that this time there are not 1, but 2 Latin names in the title. That is because I discuss both types that are common locally, in my neck of the planet. The monogyna is the one with the white flowers; it’s the one we often call common hawthorn and has 1 seed per berry. The laevigata is the shrub with the pink flowers, is often calles midland hawthorn and has 2 seeds per berry. The X stands for cross, or hybrid, because these two hawthorns propagate together.

So much to tell about this shrub! Let’s start by talking about its medicinal properties of which there are many. These properties mainly concern heart and blood vessels and related ailments. Think of, for example, heart failure, blood pressure and circulatory disorders. In addition, hawthorn has a positive effect on stress-related disorders.

Magical effects of this tree

Of course, I cannot help but start with fertility magic when it comes to magical properties. We probably all know the folk festivals at the beginning of the summer, where girls and boys dance around the maypole with their red and white ribbons. What is less known is that the hawthorn is a powerful protector against magic with evil intentions and is a good helper for divination. But there is much more to tell. Read the rest about the properties of the hawthorn in terms of healing power, magic and of course edibility – this tree was not called the bread and butter tree without a reason – in the rest of the monograph.

Hawthorn is a slow-growing shrub that usually reaches a maximum height of 10 metres, but sometimes up to 20 metres. The hawthorn has an extensive root network and a densely branched crown.
The bark is initially light grey and smooth, but changes to brown and cracked over time. The wood has different colours: the heartwood is red, while the sapwood is white. The branches are often contorted and carry thorns. The number of thorns depends on the species: the laevigata has fewer than the monogyna.
The leaves also differ per species. The monogyna has deeply incised leaves with 3 to 5 separate lobes. The laevigata has 3 to 7 shallow lobes and a serrated leaf edge.
Both varieties also have different coloured flowers, monogyna white and laevigata pink. The flowers have five petals and are arranged in broad cymes. The anthers are red (laevigata) or purple (monogyna). After flowering a red drupe forms with a remnant of the flower on its bottom, same as with apples and pears.

The folkname bread and butter tree points at the hawthorn’s widespread use as a food. Similar names are also found in other languages. I have heard first-hand stories from the generation before me, telling me that on their way to school they’d regularly eat from this shrub when, for whatever reason, they had not had a chance to eat breakfast.
The wood of the hawthorn is very tough. In the past, it was therefore often used as a chopping block for beheadings.
Rumour has it that the crown of thorns on Jesus’head was made of hawthorn branches.