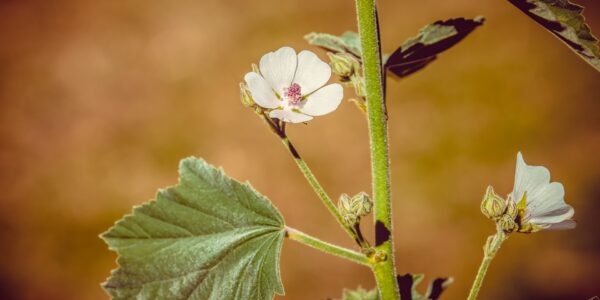 Did you know that sweet, soft confectionery that you can buy in shops under the name Marshmallow used actually to be made from the root of a plant? That plant, unsurprisingly, goes by the name marshmallow, Althaea officinalis. She belongs to the Malvaceae family and has the same typical schizocarps that we see in the rest of that family.

Marshmallow possesses enormous healing power. Her medicinal properties especially influence the mucous membranes in and on our body. These can be found in our respiratory tract, digestive tract and on our skin. Her high mucilage content causes this. Fewer people know about her positive effect on the urinary tract and weight loss.

The magical properties of marshmallow contain two areas of application that seem contradictory. Firstly, you can use this plant for libido  and erection problems. In addition, folklore tells us about several uses around funerals and the deceased. Furthermore, marsh mallow protects against malicious magical beings and attracts entities with good intentions. She also stimulates divinatory qualities.

Just about every part of this plant is edible. I already mentioned the sweet delicacy that you can make from the root. Incidentally, there is no marshmallow in the marshmallows that we eat nowadays. That doesn’t mean that you can’t make it yourself, of course. I’ll do my best to get a recipe on the website in due course.

This plant dies back every winter and grows back again in the spring. She grows to an average of 1.5 metres high, while some plants even reach 2 metres of height. She’s an impressive plant for sure. Marshmallow stands on a fleshy white to yellow taproot. The downy haired stem doesn’t display much branching. The grey-green, leaves are located along the stem on their petioles. The leaves feel velvety and are acute ovate with 3 to 5 shallow lobes. The leaf edge is dentate.
She has white to pink flowers that are in the axils of the leaves and can measure up to 5 cm in diameter. The flowers have 5 petals and many stamens with yellow or purple anthers. After flowering, the well-known cheese-shaped schizocarps appear. They contain dark-coloured, sickle-shaped seeds.

Marsh mallow is one of the plants that every monastery had to grow in their garden, by order of Charlemagne.
Together with juniper, licorice, bearberry and fennel she is part of vijfsoortenthee (which literally means five species tea), a herbal mix that was traditionally used against urinary tract problems in the low lands.
Marshmallow is also called tooth root in the Netherlands because people used to give teething children a piece of peeled marshmallow root to chew to prevent pain.
If you reduce the water in which you boiled the root, you can use the result as glue.
You can make varnish with the oil from marsh mallow seeds.
According to the Romans, a spoonful of marshmallow held sickness at bay for a day.