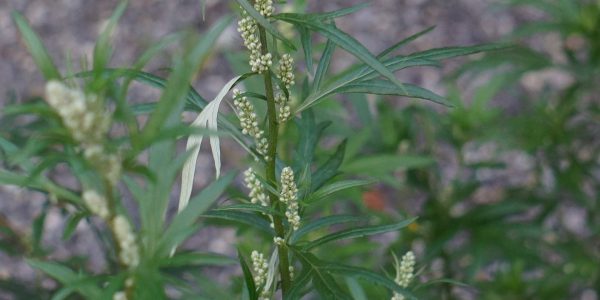 As you can see from her Latin name Artemisia vulgaris, mugwort is related to wormwood. In contrast to wormwood, mugwort contains only a little bit of thujone. This makes her a plant that is less likely to cause side effects than wormwood. The reason why I include a second plant from this family in this plant vademecum is because they each have specific benefits and because I enjoy working with both of them. If you can’t find one, you’ll bump into the other. My vademecum wouldn’t be complete without them both.

Mugwort is similar to wormwood when it comes to medicinal properties, although there are differences as well. In addition to her broad and beneficial effect on digestion, she also has a positive effect on kidney function, for example. Artemisia vulgaris helps regulate menstruation and is a nerve herb that according to folk medicine can be used in epilepsy.

Magical effects of this beautiful herb

Magically, mugwort is more versatile than wormwood. In addition to its huge number of uses in sympathetic medicine, it’s a well-known divination herb. Many also know it as an ingredient in witch’s ointment, or flying ointment. This unassuming plant often aids pregnant and childbirth women. She is also a helpful ally in both midsummer magic and moon magic.

Mugwort stands on a woody rhizome. This rhizome is the part that hibernates, the rest of the plant dies off in winter. In spring mugwort sprouts again. The furrowed, red to purple-red stems are woody, which can make mugwort look like a bush. This effect is enhanced by the strong branching of its stems and its size. It often becomes 1.5 meters high, sometimes even higher.
On the stem you’ll find leaves that are scattered and pinnatipartite with deeply serrated slips. The leaves are often double pinnate at the bottom and single pinnate towards the top. The leaves are smooth and green on top and greyish white and pannose on the underside.
The inflorescences are leafy plumes with small flowers on top. The plumes have a white pannose appearance. The flowers have protruding yellowish stamens that later turn reddish brown.

Mugwort spreads pollen that are highly allergenic. Mugwort is therefore not such a popular plant with many people who suffer from hay fever.
Beekeepers use mugwort to prevent bees from swarming out.
Mugwort repels mosquitoes and moths. The English folk name mugwort and the Dutch muggerik are a reminder of this.
The fibres of this plant can be used as tinder.