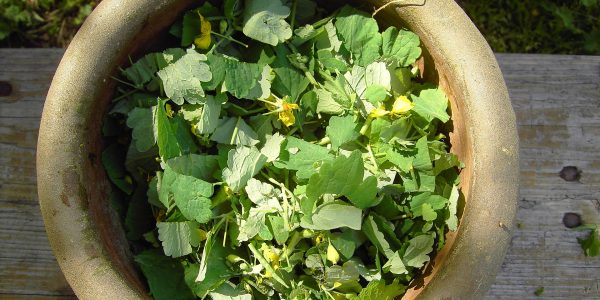 I remember very well that my cousin had a wart and that my grandmother took him towards a plant at the back of the garden. It literally grew in the fence and had yellow flowers. My grandmother carefully broke off a piece of the plant and dabbed the wart with the juice that came out of the stem. Then she instructed my cousin to touch the wart with the juice of this plant at least times a day. After a few weeks, the wart was completely gone. That was my first encounter with celandine, or Chelidonium majus.

Later on in life I found out that celandine has much broader medicinal properties. Like many plants with yellow flowers, it has an impressive effect on the liver and gallbladder. One of the effects on these organs is that this herb decramps smooth muscle cells and it does that in other organs as well. This makes it very useful for other conditions in which cramping plays a role. Think of asthma, stomach and intestinal cramps and related indications. Celandine has been used for eye conditions and much more since ancient times.

The magical properties of celandine are also quite extensive. It protects you in general and during wars specifically. With celandine by your side success is assured. It also makes sure that you don’t get stuck, literally and figuratively. Chelidonium majus can also predict the course of a disease. In short, this plant is a valuable ally. I will tell you more about it in this plant monograph.

Celandine has a highly branching, but small rhizome. The rhizome is thick and succulent. Celandine can proliferate a bit. The stems are hollow and fragile, with woolly hair, which secrete a stinking dark yellow to orange juice when broken off or crushed. The leaves are green on top and blue-green underneath and are imparipinnate – in this case there are 5 or 7 leaf segments – or scalloped.
Celandine has yellow flowers, 2 to 2.5 cm in size, with four petals that are arranged decussately. The flowers stand in loosely arranged umbels at the end of the stems in the leaf axils and have a large number of yellow stamens. After flowering thin legumes with small black seeds appear.

Ants love the white appendages of the seeds. Thus they drag the seeds everywhere and help spreading the plant.
Celandine seems to like being around people. You often see this plant near buildings.
The name chelidonium comes from swallow. Celandine is associated with the swallow because it emerges when the swallows return in the spring and dies when the swallows leave for winter.
Alchemists put a different spin on that name. They made it coeli donum, or gift from heaven, because the colour of the sap made them think the plant contained gold.