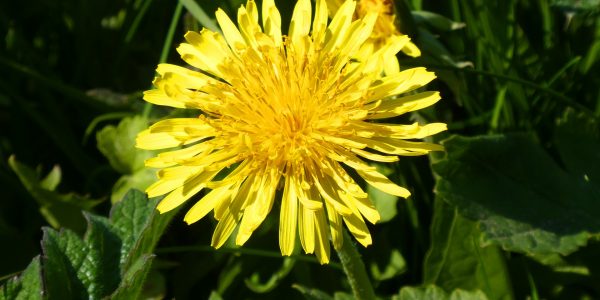 Where to start when it comes to the dandelion, Taraxacum officinale? Due to the milder climate, this plant nowadays often blooms all year round and thus brightens up many lawn areas. But in addition to the aesthetic advantage of this, there is another advantage. Dandelion is essential food to many insects, including the butterfly, bumblebee and bee. That alone is a reason to cherish this plant. It’s a pity, therefore, that many people consider dandelion a weed.

They may change their mind when they hear about what this modest but mighty plant is capable of. She also has plenty of medicinal properties. Dandelion, for example, has numerous beneficial effects on the digestive system and related organs. It also detoxifies in several ways. In addition, it is rich in a few very interesting minerals that help with bone building, among other things.

Dandelion also has plenty of magical properties. It helps with all kinds of eye issues, including your third eye. It also has divinatory qualities. And you can even send messages and make wishes come true. And should all of this be insufficient to convince you, there’s always the fact that she can provide highly nutritious food during a large part of the year. Want to know more? Read it all in this monograph…

Dandelion stands on a sturdy, succulent taproot that can grow up to a meter long. Directly above the root there is a rosette of lanceolate, runcinate leaves. The leaf edges are serrated and lobed and sometimes even entire. The stem is hollow, unbranched and smooth with at its end a solitary capitulum with numerous warm yellow ray florets. The flower is 3 to 4 cm in diameter. After flowering a seed head is formed containing ribbed achenes with pappi on long beaks. The plant contains latex.

The dandelion has many subspecies, all of which have an equivalent effect.
Western medicine discovered the dandelion relatively late, while it has been in Europe for a long time.
The dandelion has many popular names, not only in Dutch but also in other languages. In German there are as many as 500 different names for this plant.