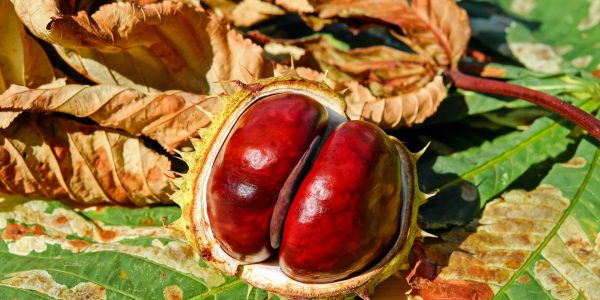 In the Netherlands, where I originally come from, cardiovascular diseases are the number 2 cause of death. In many Western countries it will be no different. Nature has given us several plants that can help with these kinds of ailments. The one I am going to describe in this monograph is one of my favourites: the white horse chestnut, Aesculus hippocastanum. Not just because it is such a beautiful tree to have in your garden, but mostly because you can do so much with it.

The medicinal properties of the horse chestnut are quite specific. This plant effects blood, veins and arteries and therefore has an effect on all kinds of related disorders, such as thrombosis, venous congestion and unwanted bleeding. Horse chestnut has this effect on the cerebral and central vascular system, but especially on the peripheral vascular system. Mind, these kinds of ailments are not harmless. Therefore, always consult an expert to investigate the cause of your complaints.

The magical properties of horse chestnut can be deducted from the appearance of this majestic tree. To name a few: the capsules containing the seeds can be used to relieve pain, especially those in the joints. And the seed itself attracts money when you use it in a talisman. Read all about the horse chestnut in the rest of this monograph!

The horse chestnut is a striking tree during springtime. It can reach a height of 20 to 40 meters and flowers abundantly with its huge sweet-smelling racemes. The trunk is sturdy and often turns slightly to the left. When the tree is still young, the bark is smooth and green-brown. This later turns grey-brown and scaly.
A striking feature of the branches is the scar left by the fallen leaves. It has the shape of a horseshoe, including the holes through which the horseshoe nails are hammered. The twigs are grey or reddish brown with light coloured pores. These twigs carry sticky buds in spring.
The leaves are compound hand-shaped and have 5 to 7 obovate leaf segments. The white flowers bloom in imposing thyrsi at stem apex, composed of racemes with cincinni, which can be up to 30 centimetres in size. The strong honey-sweet scent of these inflorescences is striking. The flowers themselves are symmetrical on both sides and consist of 5 white petals with a red or yellow spot at the base. After flowering, a capsule is formed, containing 1 to 3 shiny, reddish-brown seeds (the so-called chestnuts or buckeyes).

The name horse chestnut has several possible origins. The most obvious one seems to be the shape of the scars left by the fallen leaves. They look like horseshoes. However, if you consider that the tree has been used for a long time as feed and medicine for horses, it could be that that’s where the name originated from.
In addition to its medicinal and magical uses, you can do other very practical things with this tree. You can, for instance, do your laundry with the chestnuts!
And when you collect chestnuts, don’t throw the husks away. You can use it to dye wool and other natural fibres. They give a nice light brown colour.