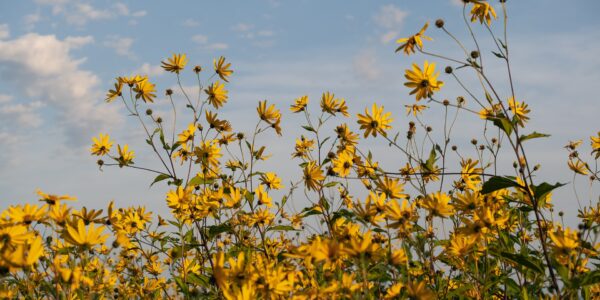 Jerusalem artichoke, Helianthus tuberosus, is also known here in the Netherlands as a so-called forgotten vegetable. To me, that’s funny, because this plant came to us from North America and can’t have been here for that long. And yet, it apparently ended up being forgotten already. It’s also rather unfortunate that most people no longer eat this plant, because it has many health benefits.

Jerusalem artichoke tubers contains a considerable amount of inulin. We saw inulin before in the root of chicory . This substance has a positive effect on yourblood sugar level, the intestinal flora and a number of things that sometimes go wrong in our current time and age. The application of Jerusalem artichoke is relatively straightforward and simple. You don’t need any intricate tincturing or decoction techniques.

I can’t tell you much about Jerusalem artichoke’s magical effects, because not much is historically known about that type of use of this plant. Of course, you can always employ this plant in line with its medicinal effect. I can also imagine that this is a plant that you would use in earthy magic. I’m talking about magic to ground, to stand firmly in your own shoes and to counteract emotional turmoil. In terms of edibility, I can certainly recommend this plant. I eat the tubers myself regularly and prepared in different ways.

Jerusalem artichoke is a plant that can grow to be quite large, up to 3 meters. With its cheerful, sunflower-like, yellow flowers, it is an asset to any garden. But for us the most interesting are the underground tubers. These are round to oval in shape with an erratically shaped skin. They range in colour from yellow to orange-red.
The stems are not or little branched with alternating and, more upward, opposite broad, lanceolate leaves. The previously mentioned flowers are usually up to 8 cm in diameter with 12 to 20 ray florets. The flowers generally do not yield seeds.

Jerusalem artichoke proliferates itself rather easily. If you have it in your garden, its therefore advisable to eat it often or plant it in a limited piece of ground or large container.
During the Second World War, many people owed their survival to the Jerusalem artichoke. This strong and fast growing plant was very popular as a food in those days.
The taste is somewhat similar to that of the artichoke, hence some of the popular names that refer to it.