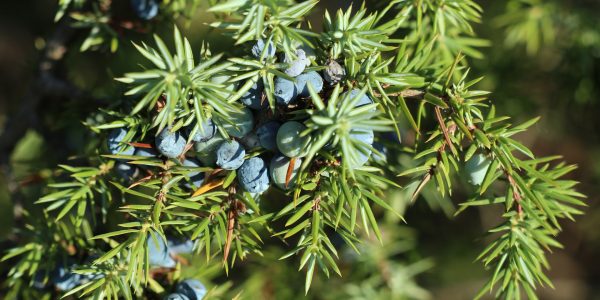 Juniper, Juniperus communis, is such a versatile shrub! You can eat it, distil it into liquor (gin), dye your wool and varnish your furniture with it and much more. In this monograph we are, of course, going to talk mostly about the medicinal and magical effects of this plant and its edibility, but I wanted to mention it anyway. From a botanical point of view, Juniper is also quite special. Thing is: the full cycle of this plant spans three years and you can observe all phases of that cycle on one and the same plant.

Medicinally, juniper is best known for its effect on the kidneys and urinary tract. Related to this is its efficiency as a blood purifier – and conditions that benefit from blood purification, such as acne and other skin infections – and urine production – and with it conditions such as arthritis and gout. Like many conifers, it has an antiseptic and expectorant effect, which means it can also be used for respiratory infections.

Magical effects of this shrub

Magically, juniper is mainly related to death, the underworld and the ability to communicate with those who are no longer from this world. This isn’t surprising since it was also used to burn in rites related to the underworld. This plant can also be used to get yourself a new love and a good sex life.

The juniper is a slow growing shrub that can develop into a tree of about 12 meters. The shape of the bush depends on the soil in which it is rooted. In good conditions it becomes conical and large, on poor soil it is squat and spread out to about 5 metres in circumference.
The bark is rough and gnarled. The tree is heavily branched with brown bark on the older wood and reddish bark on the younger wood. The needles are 4 to 20 mm long, pungent and grey-green when young and softer, scaly as they age. They can be found on the branches in bunches of 3, placed verticillate or  decussate, and each needle has a white stripe on the topside.
The flowers are a light yellow (male) or light green (female) and can be found as strobili in the leaf axils. The female flowers will eventually develop into 6 to 8 mm berries (if fertilised), but this will take a long time. Only in the second year, the green berries appear which will develop into the dark purple berries in the third year. Those dark berries are the ones we use culinary. The ripe berries contain 3 triangular and hard seeds.
This process is not linear. It’s possible that on one bush you’ll find are flowers, green berries and dark berries. The juniper has an aromatic, piney fragrance.

The juniper is protected. If you encounter one in the wild, you should therefore not plunder it. If you want to use this plant regularly, plant it in your garden. Make sure you buy the right kind. Only the communis is usable.
The juniper was traditionally considered a sacred plant. It was used as incense in temples. Later, juniper also got an important role in church rituals, for example as a palm Easter branch. That’s the reason the berries are still called Holy Berries, Holy Beer or Weihbeeren in some parts of northwestern Europe. The buds were often sprinkled on the floor in temples and later churches, probably because of the nice smell.