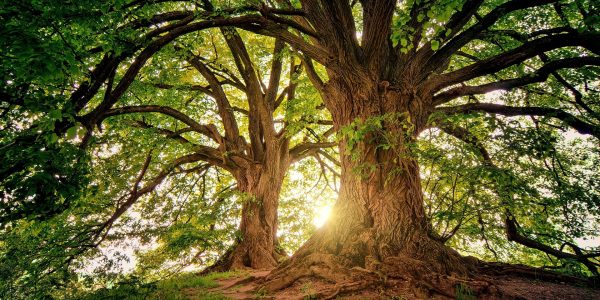 There are many old linden trees along the street where I currently live. When they’re flowering you almost get intoxicated by the deliciously sweet scent. And when you have a cup of yummy linden tea in your hands, you cheer up right away. The linden tree, Tilia cordata, is special to me at any rate. Some of my ancestors chose their last name in honour of this tree. She always had a prominent place on their land. We liked to snack on her leaves early in spring and my grandmother used to make a delicious drink out of her reduced juice with cold water.

I don’t know about you, but I can’t stay sad with a cup of steaming linden blossom tea right under my nose. For me it is therefore easy to remember that the lime tree has a calming effect. Like lavender, the linden tree is known for this relaxing and for its sleep-inducing ability. What some don’t know is that one can also use this excellent plant against respiratory diseases, gastrointestinal afflictions, flu and much more.

Given the fact that the linden is widely spread, purposefully planted by our ancestors, it is logical that this tree was magically considered to be a protector in general. That is most likely the reason why so many people had a lime tree prominently stationed at their property. And why there were so many people who used a variety of Linden as their last name. Many varieties of this tree grow in the Netherlands and you can eat all of them. You can also use each variety for the medicinal and magical purposes described in this monograph.

The lime tree stands on a broad-spreading, heart-shaped root system. It has a relatively short but sturdy trunk which is grey and smooth for the first 20 years of its existence and then turns dark brown with longitudinal grooves. The trunk opens into a leafy, lush and dense crown that usually has a balanced shape.
The heart-shaped leaves are attached to long twigs , 3 to 8 cm in size, and have a serrated edge. The leaves are glossy deep green on top, blue-grey green on the underside with some reddish-brown domatia in the vein axils, and are pinnate nerved. The young leaves are lighter in colour and edible, but when they are older the leaves quickly become leathery and tough. The tree starts blossoming after its 20th year and then has wonderfully fragrant white flowers with 5 petals and yellow stamens. These grow in corymbose inflorescences of 5 to 10 flowers and wilt quickly. The inflorescences grow on a long twig from a phylloclade. This leaf-like twig eventually comes loose together with the inflorescence when the seeds come down later, looking like little helicopters.

There are many linden varieties in the the north west of Europe and all of them are edible and useful for medicinal and magical purposes as described in this monograph.
The linden tree was the tree from which a leaf fell between the shoulderblades of Siegfried (from the Nibelungen) as he bathed in the blood of Fafnir, which was supposed to make him invulnerable. As a result, he could still be injured in that spot, which would prove disastrous later on.
Be careful not to fall asleep underneath a linden tree. You might wake up in Faery.