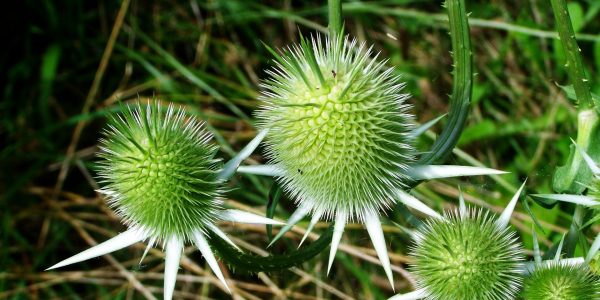 Milk thistle, Silybum marianum, is a wild beauty found in rugged places. With spring approaching, I thought it would be a good idea to discuss this plant in detail. Many people are currently engaged in what they call detoxing. They follow all kinds of complicated diet regimens, while there’s only one thing that is really important to know. You do not detoxify by eating or drinking certain things for a short time – or not – but by supporting your body in the removal of toxins on a daily basis.

You can juice fast until you’re blue in the face, if your kidneys and especially your liver are not working properly, you are only moving waste products around in your body. And that can have disastrous consequences. Milk thistle is a great plant to support that liver, your most important organ when it comes to waste disposal. It supports and restores the liver itself and the way it functions and works against many liver failure related conditions. In addition, milk thistle has medicinal properties against a number of disorders of the digestive tract and blood vessels. But if you want to remember just the one thing about milk thistle, it should certainly its beneficial effect on liver function.

The most obvious magical property of milk thistle shows through in its appearance. She’s a powerful protector of home, hearth and women. She reminds women that they are powerful and allowed to show their emotions. After centuries of being told that a woman should be sweet and caring, we sometimes forget that. But if this plant shows us anything, it is that you can be soft and fierce at the same time. But milk thistle does a lot more. For example, you can summon entities and send them away. And I haven’t even mentioned the fact that this plant is edible. You can read all about it in the rest of the monograph!

Milk thistle stands on a large taproot with a leaf rosette above it. This plant can grow up to 2 meters high and has a grooved and cobwebbed stem. Along that stem are the dark green, white veined leaves with yellowish spines along the edges. At the bottom of the plant the leaves are sessile, large and deeply cut pinnatifid and more upwardly clasping, lanceolate to cordate.
The pink, purple or sometimes white flower is large and stands at stem apex. It consists of tubular florets with dentate bracts that have a long spine at the end. After flowering, the seed appears in the form of a brown or black achene on a pappus.

Milk thistle seed was once used as a coffee substitute.
The plant owes its common name milk thistle to the milky white lines on the leaves, according to tradition caused by the breast milk of fertility goddesses from various pantheons or the stomach of Mary. Because of the latter, the plant is called marianum or milk thistle.
The plant is widely cultivated in some countries, because it is well usable as food.