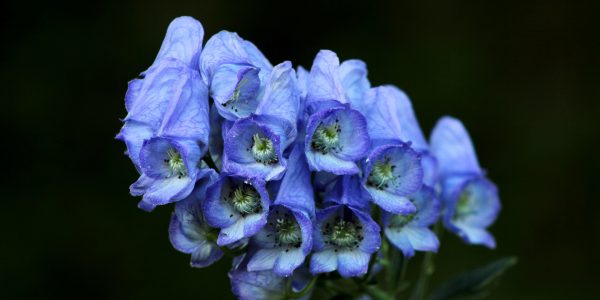 Anyone who has ever encountered Monkshood in the wild, for example on a mountain somewhere in Central Europe, has probably been deeply impressed by the beauty of this plant. Both the yellow and the blue variant of Aconitum can at least be called extremely decorative. However, you will not often find this handsome fellow in your average garden. At least … not if the owner has studied the properties of this plant. Most will not dare if they have.

Still, monkshood should not be left out on a website about, among other things, magical plants. Notorious for her strong toxicity, it is of course a well-known ingredient of the infamous flying ointment. Obviously – but I want to mention it anyway – this is not a plant for a novice to tamper with. It could well be your last experiment. As part of witch ointment, the presence of aconite probably explains the sensation of changing into an animal that users often report.

This plant was formerly used as a medicinal herb, but the information on its use, as well as the dosage, is not straightforward enough to describe discuss it here. I appreciate my visitors too much for that;)

The blue monkshood has large purple-blue flowers that resemble the hoods of a monk’s habit. Hence the name. The upper lip of the flower is galeate, or helmet-shaped. The flowers are 2-3 centimetres in size and grow in dense clusters. The leaves are fanned out, dark green in colour, incised, deeply palmate into 5-7 dentate lobes, which in turn are also deeply incised. Stem leaves are alternate, stem is stiffly erect. Follicles. Root has a main tuber with 1 or 2 thinner side tubers, with the main tuber in the shape of a turnip.

Rare and protected plant.
Ovid already mentioned a plant called akoniton. This plant was used by Medea and originated from the saliva of the three-headed hellhound Cerberus. However, this cannot be the blue aconite, because it does not grow in Greece.
Most Germanic names for monkshood are related to Thor / Donar and Tyr. This has to do with the myth in which Tyr and Thor stand against the wolf Fenrir and the snake Jormungand. This incident ends badly for Thor. His son Widar then kills Fenrir, releasing so much power that from then on the Thor hat, a popular name for monkshood, sows death and destruction among wolves. That is why monkshood is also called wolf’s bane: it was often used to kill wolves.