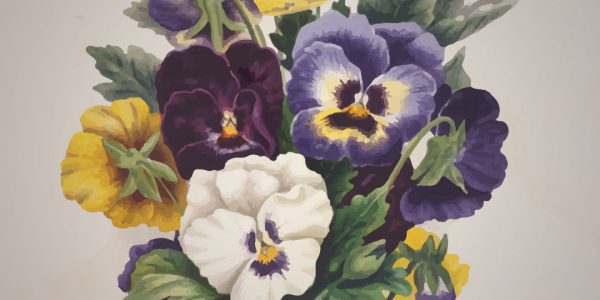 A monograph that should definitely be among the plants in this vademecum is that of Viola tricolor, or the wild pansy. This plant always reminds me of my mother. Not because it is her favourite plant ever – that’s the hydrangea, the variety with deeply blue flowers – but because she always loved having pansies in her garden when she still had a garden. As soon as it began to look anything like spring, they’d appear at the front of the house, making it look instantly cheerful. So you can say that I have pleasant associations with this plant.

But pansy is not only a pleasant plant to look at, it also has a lot of useful properties. For example, it has a broad medicinal effect. Think of skin conditions and other conditions for which detoxification and blood purification is a good idea. Pansy can also be used for a number of urinary tract related disorders and respiratory diseases. Its effect is subtle and, as a result, it is often not seen as a powerhouse plant, but it is therefore very useful for those people who need a gentle approach, such as children and people with a weak constitution after a severe illness or intervention.

Magical properties of this cheerful plant

Symbolically, pansy represents purity, love, but also death. In terms of magical effects, the pansy influences both finding and keeping love. It predicts and affects rain. At the same time, the violet also has a magical reputation as a plant of death and misfortune.

The pansy is usually an annual, sometimes a biennial plant. It stands on a taproot with lateral roots. The stem is thin and erect. The leaves are oval to lanceolate, dentate to lobed, with trilobed to octolobed or pinnatifid stipellae, of which the foliole is most developed. The flowers stand alone and appear in the colours white, yellow, lilac and purple and all kinds of combinations of those four colours. The flowers have 5 petals, 1 pointing downwards, elongated and spurred and the other 4 pointing upwards. The flower has 5 stamens with yellow anthers and a pistil with a spherical stigma. After the flower comes a valvate capsule from which many seeds emerge.

Viola tricolor does not smell very strongly. Her sister wood violet (Viola odorata), on the other hand, is strongly aromatic. This little sister has been used medicinally since recorded history. Viola tricolor has a shorter history of use, but is now more widely used than the odorata.
Even Shakespeare knew about the magical powers of pansies and violets. In Midsummer Night’s Dream, Oberon drops the juice of a violet into Titania’s eye so that she would fall in love with the first person she would see upon awakening. Of course, he intended that he would be that person, but things turned out a bit differently…