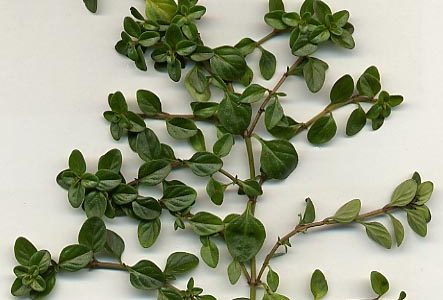 Some herbs are well-known  because they appear in every spice rack. Thyme, Thymus vulgaris, is one of them. Originally humans mainly used this plant in the cuisines of the countries around the Mediterranean, but nowadays it is a commonly used kitchen herb. Something fewer people know is that she is also a very powerful medicinal and magical herb.

Her most famous medicinal property must be the one on the airways, both the upper and lower respiratory tract. Thyme has such a broad and powerful effect on the respiratory tract that many herbalists consider her the preferred plant for this type of disease. But she also helps digestion. Therefore, it is not surprising that it is a popular seasoning. Our clever bodies probably ask for it regularly. There’s much more to know about this plant, so do read the rest of the monograph to get the whole picture.

Magical effects of this fragrant plant

Magically, thyme is also often used in sympathetic medicine. In addition, we can employ her repelling and purifying properties, which have a broad spectrum of application.  If you need protection in general or specifically against material misfortune, reach out to this plant. She also has an her assisting role in divination. And these are only a few applications!

Thyme has a dense root ball consisting of thin roots. The lower part of the central branch is woody and looks like a small trunk from which the stems grow, partly laterally, with small upright branches, which is why the plant runs somewhat. Every year the old stems become woody and will have new upward twigs growing out from them. The stems are strongly branched and have decussate, lanceolate green leaves, at most 1.5 cm long with a deep midrib. The leaves are aromatic, slightly leathery and revolute at the edges. They are the parts of the plant which are often used for cooking.
The tiny flowers are numerous and grow in racemes from the leaf axils of the upper leaves. The flowers themselves are white, pink or lilac tubular florets with a three-lobed upper lip and a two-lobed lower lip and 4 stamens. Like many other types of thyme, they produce a lot of nectar which is why bees love it. The schizocarp that comes after flowering is quadrilocular and produces 4 brown, oval seeds.

For magical use, real thyme and wild thyme can be used interchangeably. Medicinally, common thyme is stronger than wild thyme, but red thyme (Thymus zygis) is equally useful medicinally.
Traditionally, thyme was considered a holy plant, she was often used in temples of goddesses in particular, either in the form of an incense offering or in the form of a wreath to be left behind.