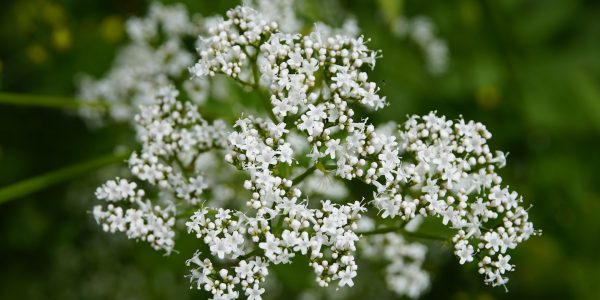 Valerian is one of those plants that could easily be found in the area that I grew up in. The moist river clay made this plant feel very much at home. Whenever I rode my pony skirting the edges of the woods along the Oude Maas, I regularly zoomed past it. It was definitely a plant that we knew well and knew how to use. A monograph of this plant is therefore certainly a good idea.

From a medicinal point of view, valerian is an excellent plant to give rest and relaxation. In case of insomnia, nervous disorders, hyperactivity, anxiety and all kinds of related conditions, valerian helps along several pathways. Valerian is also very useful for addiction problems. All in all, valerian is an herb that should be treasured in our hectic society, as it offers a natural alternative to sometimes harmful medication. Ultimately, tackling the cause of the affliction is of course best, but valerian is very suitable to break a vicious circle.

Magically, it is not surprising that valerian is used to sleep well, but also to strengthen psychic powers, for example during divination. Valerian is also used for purification and protection rituals and to maintain or restore calm. In addition, it is said that a woman only needs to attach a sprig of valerian to her clothing to get men to follow her around like puppies.

Valerian has a compact, creeping rhizome with many lateral roots and rhizoids. The root is fleshy in texture, except for the rhizoids, which are fibrous. The stem is erect, hollow and furrowed and only has branches at the top. At the bottom of the stem there is a leaf rosette and further down the stem opposite leaves. The leaves are unevenly pinnate with 11 to 23 serrated leaflets.
The flowers appear in the third year. They are 2 to 4 millimetres in diameter, with white to deeply pink coloured tubular florets. The achenes are light brown with four ribs and a pappus with white hairs.

Red valerian (Centhranthus ruber) can be found in many gardens. Red valerian is no real valerian though, and this plant has no medicinal effect.
Valerian has been used medicinally since ancient times. At the time it was used for many more purposes than it is today. As a result, it was known to be a panacea. It isn’t surprising, therefore, that valerian is one of the plants known in English as All-heal.