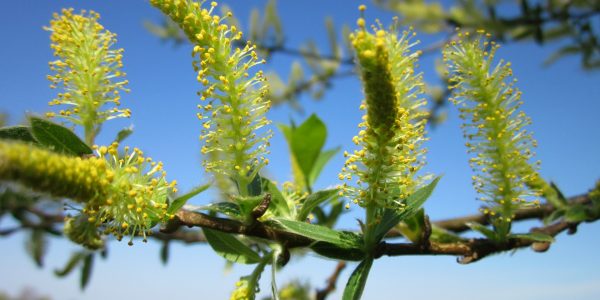 If I had to choose one tree to put in my garden, it would be the white willow, Salix alba. She may not be as majestic as other trees, but if you only have space for one tree this it is a great one to have on your side. You will find willows everywhere, even in wet places where other trees don’t do well. That is why I have known them from my early childhood. In the swampy soil along the rivers of my childhood there were plenty of willow trees.

The medicinal properties of willow, Salix alba, in a nutshell

If you look into medicinal properties of the willow, you will find that almost everyone uses willow-based medicine. Thanks to the willow we have aspirin. Willow contains something called salicin which is converted into salicylic acid in our body. But because willow bark contains more constituents, and not just the isolated active ingredient like aspirin does, it usually works with fewer side effects. So willow has a powerful analgesic effect, but it can do more. It also works in afflictions involving the urinary tract.

The magical properties of willow in a nutshell

Taking the medicinal properties into account, it is not surprising that willow was traditionally used in magic for protection and healing. You can use willow to make a broom and it’s a good ally for your divination practice. It is also strongly associated with the moon, with water and feelings. It can rightfully be called a magical tree.

Large tree that also occurs as a shrub, forming a taproot, with a broad-growing central root system at a later age. The bark is rough and grey-brown, often deeply grooved at a later age.
The branches are rising upwards from the trunk and remain flexible for a long time. The young branches, which are orange-brown in colour, are extremely flexible and therefore extremely suitable for use in, for example, woven baskets. That’s where the nickname Whip Tree comes from.
The leaves are oblong, up to 4 times as long as they are wide and green at the top and silver-grey at the bottom. The bottom is covered in downy hairs.
The inflorescences differ between male and female plants. Not so much in shape, but mainly in colour. Both start out as grey, sericeous catkins and develop into cylindrical panicles, the male yellow and the female green in colour. They are followed by the valvate capsules, from which black seeds with a pappus emerge.

It is striking that the trunk of a willow can be in a major state of decomposition, while there can still be a hard core coming from the original taproot, which ensures that the willow continues to live.
Dowsing for water was done with a forked willow branch.