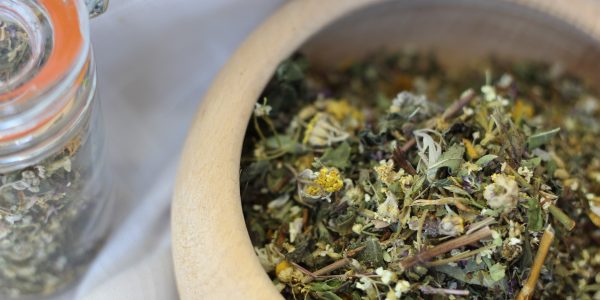 I personally think wormwood, Artemisia absinthium, is a beautiful plant with its fine grey-green mass of leaves, but many would not put this plant in their garden because it does not bloom very abundantly. They would probably change their mind if they knew that this plant is very potent, medicinally and magically. This also goes for her little sister mugwort, but wormwood is just a bit more powerful. Anyway, a monograph on this plant is a must have for this plantvademecum.

During the coronavirus outbreak, one of these plants was put forward as a good helper against this virus. For a reason, because wormwood has a powerful antiviral and antibacterial effect. But that isn’t all it can do. The plant is best known for its effect on digestion and is therefore regularly found in herbal bitters. Less known is that wormwood can also help with nerve disorders, depression, menstrual issues and more.

Magically, wormwood is renowned for its hallucinogenic qualities. The alcoholic beverage absinth, known for its abilities to transport you to other, more inspiring realms, is made from this plant. Not surprisingly, it is an ingredient of witch ointment and is used in divination. It is also used in protective magic. Less known is its effect on fertility magic.

Wormwood stands on a woody rootstock and spreads through rhizomes. Woody, sturdy and wide-branched, greyish stems grow from the root, making the plant almost like a shrub, especially because of its height. The leaves are grey-green on top and greyish-white on its bottom with a pannose quality to the touch. The shape of the leaves is deeply incised thrice. The flowers are yellow, small and spherical and consist of numerous tubular florets. The plant smells nice and tastes bitter.

The drink absinthe is named after and made from this plant. The drink was banned in Europe for a long time, but is now for sale again. The reason it was banned was the alleged toxicity when over-consuming the drink. However, this later turned out to be grossly exaggerated and most of the bad effects could be ascribed to alcohol itself. Another name for absinthe is the Green Fairy, because many artists ascribed their inspiration to it.