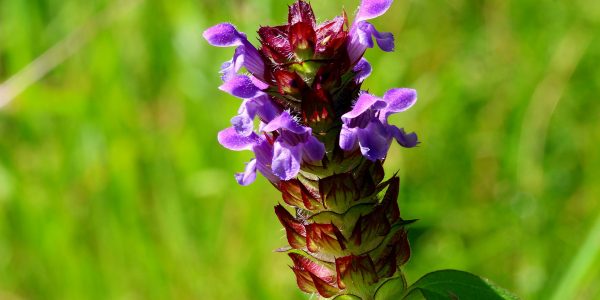 A great plant that I often fail to find in herb books is the common selfheal, Prunella vulgaris. Weird, considering this plant that is also called heal-all. Maybe it’s because it’s such a common plant? I’m personally a big fan of using plants that you can simply find in the wild. Which you don’t necessarily have to cultivate in a garden. Especially if that plant has also been used as a medicinal herb all over the world for centuries. Self-heal is one of those.

However, I would right away like to note that the practices described in this monograph are not always scientifically proven. They are often substantiated by centuries of use in folk medicine and the experiences of the many wise women in whose footsteps I follow. They used self-heal internally and externally. The latter, amongst others, because of its astringent and wound-healing properties. Internally, self-heal can be used for a wide range of purposes. Some examples of those are disorders of the digestive system, but also of the respiratory and urinary tract.

Magical properties of this pretty herb

Magically, selfheal is a plant you can use for anything that offers peace of mind and protection. Think, for example, of protecting your home and yourself in stressful times, but also maintaining a valued relationship. In short, self-heal is an inconspicuous plant with a remarkable number of beneficial effects.

Selfheal is a creeping plant. The stem is procumbent, branched and square with oblong to ovate leaves arranged decussately. The leaves are slightly hairy and have a smooth to slightly serrated edge. They are medium green in colour with a slightly red colouration towards the tip.
Towards the end, the stem is decumbent. The inflorescence at stem apex comes in the form of a raceme consisting of several false whorls of 2 to 6 flowers. The flowers are purple and have two lips.
Before and after flowering, when there are no flowers, the inflorescence resembles a beehive, from which it gets its folkname ‘little beehive’ in several languages.

I wrote earlier that selfheal is unobtrusive and for the most part it is. It is not a plant that immediately catches the eye. However, as soon as you have more together, that quickly changes. Bees and other insects love self-heal, which makes a gathering of loads of self heal a true buzzing party.
Selfheal is one of those plants that has been or is used in just about every medicinal tradition. That alone is reason to honour this plant: apparently practically all nations independently discovered that this is a very useful ally.