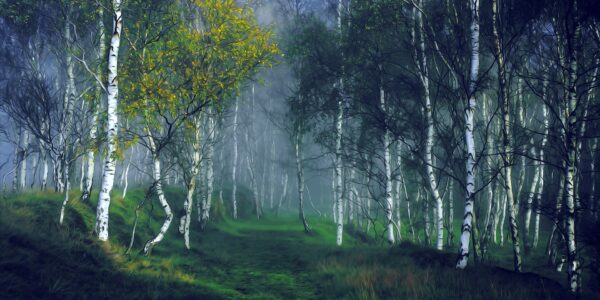 The birch is best known for its influence on the kidneys and urinary tract. It is therefore a valuable tree for people with, for example, bladder infections, kidney infections and other related conditions. Diseases related to kidney function, such as oedema, gout and eczema can also be treated with birch, just as it helps the kidneys with a good detoxifying effect. Those among us who are a bit older probably remember Birch Hair Water. Birch helps against dandruff and oily skin. As a result, you can also find it as an ingredient in shampoos and skin lotions.

Magical properties of this tree

On a moonlit night, the birch itself also seems to glow. It is, therefore, not surprising that many magical properties are attributed to the birch. The best known is probably her protective effect against sorcery and curses, but also of livestock and crops and against misery in general. Birch is a symbol for spring and budding life as well. She was used in life rods and to find love. And birch could also be used for many types of divination.

Now, I haven’t even mentioned all the practical things you can do with this beautiful tree, but fear not… they will be discussed in the rest of the monograph.

The birch is easily recognisable by its white bark. It is a fast-growing tree that becomes up to 30 meters high. They usually don’t live that long. Birch’s trunk is generally dead straight. As mentioned, the bark is white or silvery in colour. This remains the case with downy birch; silver birch darkens later in life. On a tree older than 20 years the bark will show black stripes and peel off in strips.
The leaves are about 6 cm long and 4 cm wide, long stemmed and alternately arranged, and rhomboid-acuminate in shape. They have a biserrated edge. The male and female catkins appear at about the same time as the leaves, with the male being twice as long and higher up in the tree than the female. After flowering, the achenes, in the shape of small winged nuts, appear.

Birch bark burns easily. It has therefore been used as tinder, material to make torches, et cetera, since time immemorial.
Birch is mainly part of the more northern mythologies. For example, a rune is named after her and in Germanic mythology she is dedicated to Donar/Thor. In Celtic mythology, she is linked to Brid or Brigid, the goddess of, among other things, the rebirth of both fire and vegetation. Birch is important in northern shamanic practices. The ancestors live in birches and the tree symbolizes the pivot that connects the worlds.
Birch bark is one of the oldest writing materials we know.
Birch wood is very versatile. It is used for furniture, paper and brooms. Birch wood gives a high quality charcoal.
Birch tar, a product already made in early prehistoric times, can be used in many ways, for example as glue, roofing material and for tanning leather. It was also used as an ointment.