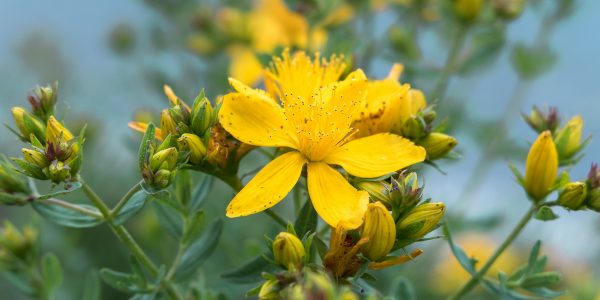 St. John’s wort, Hypericum perforatum, may not be a plant you immediately think of in winter. This plant is pre-eminently associated with summer and St. John’s festivities in June, the time when the plant also flowers. Still, winter is an excellent time for me to discuss St. John’s wort.

In terms of medicinal properties, St. John’s wort is mainly known for its anti-depressant properties. One of the types of depression that St. John’s wort helps with is the winter blues. A very nice plant to have at home in the dark months to come. It can also be used for other mood-related disorders. What is less known is that St. John’s wort is very useful against skin injuries, including burns and scrapes. Mind you, this plant comes with a ton of warnings, so read the entire monograph carefully before using the plant.

St. John’s wort also has plenty of magical properties. Unsurprisingly, this herb is strongly associated with midsummer and the power of the sun. Logically, it can be used for all kinds of magic involving passion and power. Love magic and protection are amongst those applications. But there’s more. Read about it in the rest of the monograph.

St. John’s wort grows on a highly branched rhizome. The root has buds. From those buds various woody stems emerge, which are reddish in colour and have 2 longitudinal mouldings. The root buds also have a reproductive function. In winter the entire above-ground part of the plant dies and small shoots with green leaves can be found at the root buds.
At the top the stem branches strongly so that the flowers can catch the sun optimally. Along the stems we find opposite oval leaves that are up to 3 cm in size and have no petioles. The leaves are covered with oil glands that are especially visible when you hold a leaf up to the light. The leaves then seem to be covered in tiny holes.
The flowers are bright yellow and star-shaped and up to 2 cm in size. They are placed in cymes at the stem apex.The oval petals have black stripes. The stamens are numerous, red-topped, and are arranged in 3 bundles. If you rub the flowers, a red dye is released.
After flowering, a trilocular capsule, covered in small dots, appears. It contains the plant’s brown, cylindrical seeds

The Germans regarded the red sap of the flower as the blood of Balder, the god of light and summer, and as the blood of Wotan/Odin. That is why the plant has been given a name associated with a prominent Christian figure, John the Baptist. The church wanted to thoroughly eradicate the association with Balder and Wotan.
St. John’s wort has been used medicinally since at least ancient times.