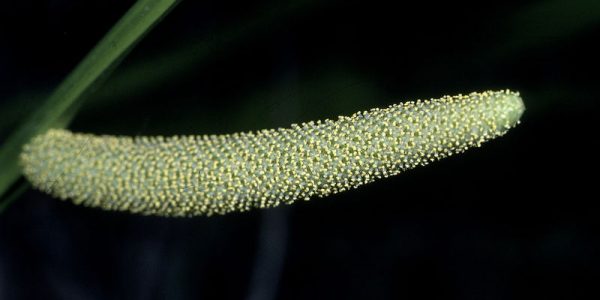 This versatile, water-loving plant, sweet flag (Acorus calamus) is well established in Europe. However, she isn’t native to the continent. Alexander the Great already brought her this way from South Asia. Today, we see her everywhere and we gratefully make use of her versatile qualities. We use sweet flag more often than we think, because it is in just about every bitters of herbs.

In medicine, sweet flag is mainly used against stomach and digestive complaints. There’s more… sweet flag also works on the kidneys and induces menstruation.It strengthens the effectiveness of the immune system against colds and flu and it also has a calming effect. This last property even manages to lower a high blood pressure.

Magical properties of this plant

Sweet flag is one of the plants mentioned as being part of witch ointment. But sweet flag can also be used to increase potency, achieve happiness, healing, money and protection. Furthermore, it strengthens the effects of rituals and spells. This plant’s edibility provides food for thought as well. The roots can be harvested year round. But be careful not to eat to much. Some people have reported hallucinations.

Reed-like plant. Flowers in yellow-green spadix, approx. 4-15 cm long, growing sideways. 6 stamens. triangular stem. Leaves in 2 rows, up to one and a half meters long, changing from red at the base to light green at the end. Rhizome is round, up to 3 cm thick, with runners. Numerous filamentous adventitious clinging roots at the bottom of the root. Smells aromatic when bruised. Infertile in Europe, propagates through the roots. Located on the banks of slow-flowing and stagnant base-rich and nitrogen-rich water, especially in the lowlands. Loves warmth, prefers full sun and does not tolerate shade very well.

Originally not native to Europe, but already brought from South Asia by Alexander the Great. From the 16th century actively used in Europe as a medicinal plant.
In the olden days, people used sweet flag in their bath water to make it smell nice.
Beekeepers used to hang this plant near their hives to keep their own bees at home and attract new swarms.