All Blogs | Written by: Emma, the Hagetisse in All wise woman's posts, Spirituality and religion 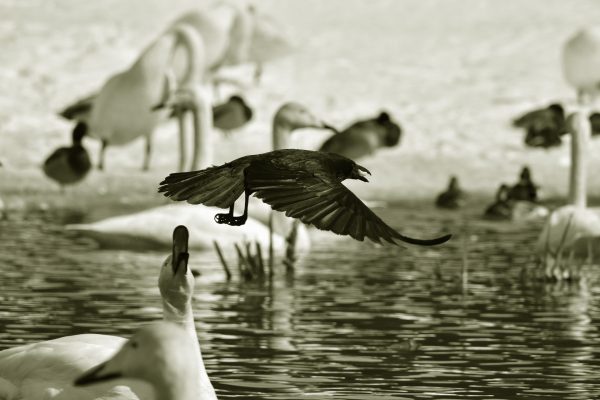 As someone who is using text to get her message across, I feel the irony when I tell you that language is limited. However, there is no escaping the fact: language has its severe limits. I feel it every time I try to describe what I feel inside to be ‘the truth’. I noticed it when I wrote the blogs about wyrd (which I will publish over the next few weeks). In my mind’s eye I can see how it works, but words are insuffiently suited to transfer the experience.

That is precisely why I think it is important to devote an entire blog to this phenomenon. I see how much value the world attaches to words. This sometimes leads to undesirable situations. Especially in the type of work I do – where a highly developed intuition and the use of all your senses is essential – it’s important to make it clear that there is a limit to what we can put into words.

We cannot rationally convey all we intuitively understand

I know that I’m not the only writer having this problem. Every philosopher and theologist will confirm it: as intelligent as we (think we) are, we lack the means to rationally convey what we can understand intuitively. We can ‘see’ the true nature of the world, but the moment we try to capture it in language, it escapes us.

Take a man like Eckhart Tolle. He has a valuable message. But his attempts to translate his view on what really matter into a universally understandable theory fail. Some understand what he’s trying to say while others don’t. And he’s not the only one this has happened to. We as a society have given language so much power, while words are impotent when it comes to encompassing the essence of reality.

I believe in fairy tales

This is my biggest frustration and at the same time my most important message. Distrust anyone who tells you that they know how things roll and that they will tell you exactly how. Words can only touch the outer limits of the truth. That’s the whole reason why fairy tales, myths, legends and other stories have always been valuable for our spiritual life. They do not pretend to tell the ultimate truth, but they do use a vocabulary of symbolism that speaks to our inner wisdom and thus brings us as close as possible to how things really are. However, the moment we, humans, want to pin a literal truth to it, it all goes haywire.

We try to use an imperfect vehicle to explain perfection. I’m not saying there aren’t any philosophers and sages who do not, with the best intentions, try to have us catch a glimpse of life, the universe and everything. But if anyone tells me he or she knows the truth, the whole truth and nothing but the truth, which they will dictate to me, well, that’s enough to make my hair stand on end.

The books that come with the main religions in the world are examples of this process. Let’s say the main characters of these books did manage to awaken the deepest knowledge within themselves.And let’s say someone managed to capture that deepest knowledge into words, into a book. If that would be the case and it would be The Truth, then each of these book should reveal the spiritual truth, right? Only they don’t. The fact that not just between religions, but even within religions uncountable numbers of movements and interpretations have arisen and that they can’t seem to agree on anything, should tell you enough. I don’t even need to point out all the blood that has been shed in the name of these religions to make my point.

Science: the illusion of objectivity

Science is, ironically, the area of expertise where the limits of language get in the way the most. It claims to tell the only truth and to know by measuring. Unfortunately, dry measurable fact is as close to the truth as they’ll ever get. Without interpretation of these facts they still aren’t much use to us. And, yes, the moment one tries to mould facts into theory even the scientist bumps into the limits of language. Add to that the tendency that every scientist has to be influenced by their own bias – something that cannot be helped, since we’re only human – and you will understand how it is possible to find studies for and against practically any thesis around.

And still this group of earthlings has been telling us for quite some time that they are the only ones with access tot the Truth. It does explain why our autonomous spiritual life and sense of connection with the larger whole that is Earth seems lost. We have been told that we personally cannot reach that Truth ourselves. Science is the new religion and it didn’t do us any good. The damage that monotheistic religion have inflicted, has been enlarged intolerably by the illusion of supremacy that our modern time has given us.

So how do you get to the core?

But if you cannot reach the core of the universe by listening to an ‘expert’ and you can’t just read a book about it, how do you get there? Well, although the mysteries of life cannot be caught in exact words, that doesn’t mean that you cannot reach them at all. I already mentioned fairy tales – especially the older, pre-Christian ones. By reading a lot of fairy tales, myths and legends you can start awakening your inner knowing. Try not to think on it, but just read them, put them away and have them make their own way into your sub-conscience. Thing is, you know an awful lot already, it is just hidden really deep down.

Read and look without trying to understand

Read philosophical texts that appeal to you for no apparent reason. Do not study them or try to incorporate them as your truth. Just take them for what they are, glimpses of the hidden world. Write down words that you notice or that come to you in a notebook, without trying to understand why they came to you. Start paying attention to your dreams. There are many other pointers to give and I’ll probably get back to this at some point. For now, however, this seems plenty to begin with.