All Blogs | Written by: Emma, the Hagetisse in Practical, All wise woman's posts, Magic 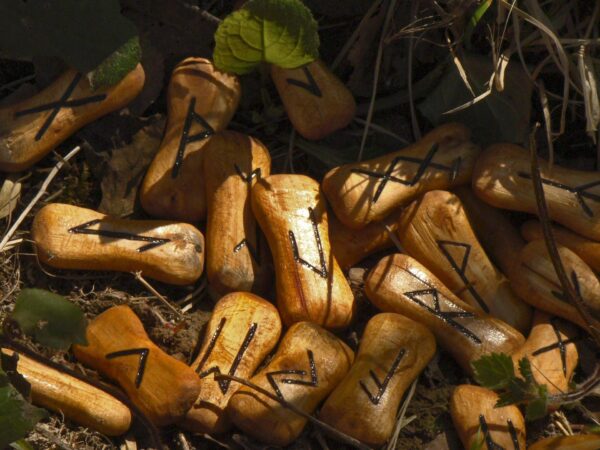 Using runes can mean a variety of things. There are those who cast them and there are those who write them. And then there are plenty of other thing you can do with them. Casting the runes means performing a reading by casting a set of stones or pieces of wood with runes inscribed on them. But runes are not a language in themselves. They are a way of writing letters, an alphabet, just like the roman alphabet we use now, or the Greek alphabet. Runes are very angular cos they were mostly scratched into stone or wood and it’s hard to do that while making your letters rounded.

So, you could in fact use runes to write a regular, non-magical message. It is the meaning behind them and using those that makes them magical when I use them. I use them both for divination and for other purposes, like spell casting.

Odin received the runes from Mímir

Now, what makes using runes so suitable for magical work and witchcraft? According to Norse mythology, Odin himself got them from Mímir after having been through quite an ordeal. He hung upside down on a tree – or rather the tree, Yggdrasil – for nine days without any food before he reached the state in which he was fit to receive these sacred symbols. The word ‘rune’ literally means mystery. One could, therefore, say that Odin went into a deep trance state by depriving himself of sustenance and sensory stability in order to receive knowledge of the mysteries of life.

Although I do not believe in gods and don’t follow a pantheon or any tradition that uses gods, I do use runes. When it comes to lore, the Norse tradition is most familiar to me and runes have always spoken to me.

What makes using runes so powerful

Each of the runes represents a sound, like all alphabets. But they also carry a word connected to them. It is that word and all the force that word represents which makes them so useful to my craft. In spell-work they are handy, cos with one symbol you carve, burn or cast a world of significance. In divination these letters convey a wealth of meaning and any combination of runes will tell me an intricate story.

Log in to read more about the elder futhark