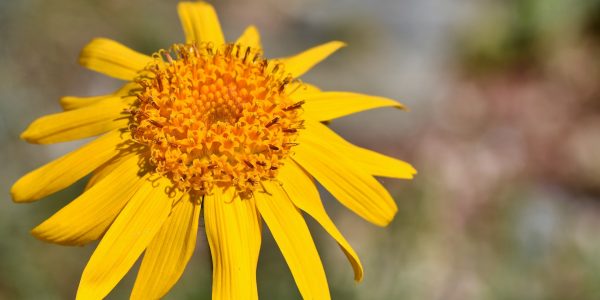 Arnica ointment, which naturopath doesn’t have it in her arsenal? I certainly do. I also had the pleasure of seeing this cheerful plant in real life in the Drents-Friese Wold. Of course I left her as I found her, because arnica is protected. I won’t reveal where she is either, because not everyone is equally conscientious when it comes to letting vulnerable plants be.

As a medicinal herb, arnica can be used internally, but only if you know exactly what you are doing. The difference between a therapeutic dose and a toxic dose is very small. I therefore stick to the external uses in this vademecum, but that does not make this herb any less interesting. Arnica is famous for its ability to deal with bruises, strains, bruises and all the other things you can get from a fall. And we all take a tumble sometime.

Magically seen, arnica is seen as a typical midsummer plant, which is understandable given its cheerful appearance. It is therefore not surprising that it is used for the somewhat darker sides of our existence, such as chasing away malicious entities. Unfortunately, this plant isn’t edible. In the olden times her leaves were dried and smoked.

Arnica stands on a running brown rhizome, which grows sideways. The first year, a rosette with 1 to 3 pairs of opposite leaves will grow on top of this root. The leaves are medium green, downy and have several distinct veins running parallel to each other along the length of the leaves. The length of the leaves can vary from 5 to 15 centimetres. They are reminiscent of those of plantain. The edges of the leaves are entire.
Not until the second year does the 30 to 60 cm long stem appear on the top of which appears a flower up to 10 centimetres in size. The stem is downy and has few to no lateral branches. Along the stem we find some smaller variants of the bottom leaves. The flower has bright yellow ray florets all around with a heart of about 50 dark yellow tubular florets. The flower oftens looks as if it’s been crumpled. Usually there is only 1 flower per plant, but there may be more. The extra flowers are usually smaller than the top flower.
After flowering, a black, cylindrical seeds appears with a beak and pappus attached to it.

Arnica is protected. So leave it be if you encounter it in the wild.
Tradition has it that sheep herders saw that sheep would immediately start looking for arnica when injured. As often happened, we learned to appreciate this powerful plant by using the inherent wisdom of animals.