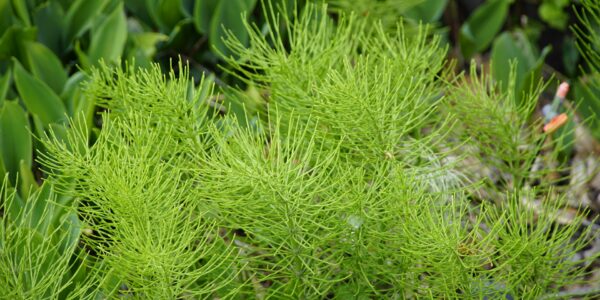 When I was young, horsetail, Equisetum arvense, intrigued me big time. I would look at the internodes of the twigs for ages. This plant looked like a construction kit! My fascination grew when I found out that this plant goes back to ancient times and, like ferns, reproduce by means of spores, which she projects over considerable distances.

My love for horsetail only increased as I learned more about this plant. I discovered, for instance, that she could influence an extremely large number of ailments. The best known amongst those are probably ailments related to the musculoskeletal system. She helps against osteoporosis and tendon infections and everything in between. Her effect on diseases of the kidneys is equally well known. Fewer people probably know that horsetail works against weaknesses in the teeth and brittle hair and nails. And that’s me just mentioning a few applications.

As a result, our ancestors have used horsetail against all kinds of ailments since time immemorial. They used her medicinally and magically. Check out the sympathetic use on diseases and discomforts, for instance. It made horsetail a popular plant to use on fractured bones, but also to remedy poorly growing and brittle hair. Another sympathetic application involved usage in the bedroom. Apparently she was supposed to be a useful ally against infertility and impotence. Given the shape of the cone containing the spores, I don’t think this is such a far-fetched application.

And, to top all this, many other practical applications of this plant are known. Read about it in this plant monograph.

Horsetail grows on roots that can go several metres deep and also move horizontally. This makes it difficult to get rid of her once she has settled in. Horsetail grows in two phases. During spring, the first stage, a stem of up to 25 cm high, without branches and without chlorophyll, appears. On top of this stem the cone appears. This is the so-called fruiting stem. In the cone we’ll find the spores through which horsetail reproduces. Those spores are sort of shot away by an ingenious mechanism. Because they can also jump, they can spread over relatively large distances.
After the fruiting stem has withered, the infertile stem follows. This hollow stem is branched and consists of nodes and internodes with 6 to 12 ribs. The side branches are situated in whorls around the central stem. These side branches also have nodes and internodes. Located at those whorls of branches are the stem nodes with 6 to 12 teeth.
Horsetail carries no leaves and no flowers. There are several species of Equisetum and due to the toxicity of other species it is important to know your species. In horsetail, Equisetum arvense, the side branches are ascending and in many others either horizontal or pendulous. In arvense the first internode of the side branches is longer than the accompanying node on the central stem.

Horsetail has many practical uses. For example, it can be used to dye textiles. Depending on the method of dyeing, you’ll get different shades of yellow, as well as olive green. Horsetail can also be used as sandpaper and as a means to polish metals.
Horsetail has a number of nice properties to use in your garden. For example, you can use horsetail manure to combat both powdery mildew and downy mildew – also called leaf blotch. Horsetail also absorbs heavy metals from the soil. As a result, horsetail is a welcome guest as a pioneer plant on soil contaminated with slag. Because of this property, it is important to ensure the horsetail that you’re using to eat or make herbal remedies from didn’t grow on contaminated soil.
There are many Equisetum species. Only arvense can be used medicinally. Many Equisetum species are poisonous, while arvense is not. The toxicity of Equisetum species for horses is well-known. This does not apply to arvense either, which is only toxic for horses when consumed daily in large quantities. In short, you’ll have to ensure that you are dealing with Equisetum arvense and, for instance, not the extremely poisonous Equisetum palustre.
Horsetail is also widely used in cosmetics, such as shampoos for brittle hair, but also creams against sagging skin, stretch marks and cellulite.
The ancestors of this plant were primitive trees that grew to be up to 40 meters high.