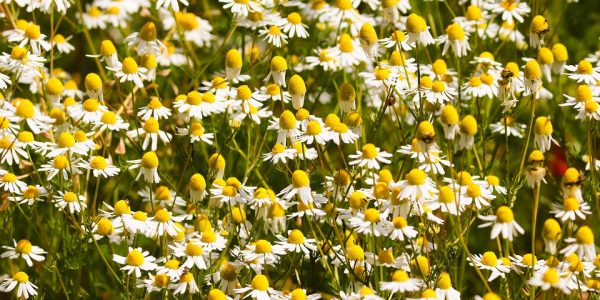 Who hasn’t sat on a couch with a cup of chamomile tea in hand? Well, I for sure have. Although it is becoming more and more difficult to find chamomile, Matricaria recutita, in the wild because the diversity continues to decrease, it is still possible to scrape together enough to quickly quell sore throats.

That is the reason why most people know chamomile tea. It is wonderfully soothing for a sore throat and helps to treat conditions of the mouth, throat and gums. But it helps against much more. Internally, chamomile continues its beneficial work by tackling inflammation of the digestive tract. As a result, it quickly relieves symptoms related to this. In addition, chamomile’s calming, stress-mitigating power is legendary.

The magical effect of chamomile is strongly related to the latter. The plant is used to sleep well and to calm nerves. In incense it helps meditate and concentrate. But it also helps in money matters and brings good luck. Enough reason to get to know chamomile better.

Chamomile is an erect plant with stems which are compact at the bottom and broad and wide-branched at the top. The narrow leaves are tripinnate at the bottom and dipinnate at the top, and are alternate along the stem. The characteristic flowers, which are 1 to 2.5 cm in diameter, have a yellow heart consisting of many tubular florets that cover a hollow receptacle. Around the heart, we find white ray florets, which are often reflexed, making them appear to bend backwards relative to the heart. The chamomile spreads a sweet scent, which reminds some people of apples.

Roman chamomile is often used instead of real chamomile. These plants have the same effect.
With a decoction of chamomile, you can make blond hair even more blond.
In Norse mythology, chamomile is dedicated to Balder.